Douglas Monroe Stahlman was born on August 17, 1861 on a farm in Warsaw

Township, Jefferson County, PA.   He was the 5th child out of 10 siblings.  He became

a teacher and taught for a time near Sigel.  Later he became a traveling book agent and

met his future wife Marion Alsobrook. He was married in Dryer County, TN on

The newly married Stahlmans moved to Valprasio, IN where Douglas began attending

classes at the Northern Indiana Normal School. Their first son Glen Davis was born on

September, 26  1898.  While living there, he became entangled in a national headline

with ramifications that would affect the rest of his life.

On Friday, February 15, 1901, Marion died of blood poisoning.  She had been ill since

giving birth to their second son James. Douglas was away in Chicago and Marion

seemed to be recovering under the care of a physician, but when Douglas returned, he

promptly dismissed the doctor and prohibited any further care, relying only on faith for

her healing.  The resulting  scandal led to Douglas being incarcerated for a short time and his being declared insane. His

children were then removed to the care of his wife's family, which instilled in him a lifelong yearning for their return.

By 1908 he had returned to Brookville and gradually began a personal quest relating to the large rocky outcrops in the nearby woodlands.  First he began praying at a secluded rock, and after a year he developed a vision of dedicating rocks with specific names such as HEALTH, VEIL-LIFTING, CONSECRATION, HOPE, LOVE, AND COURAGE which are sometimes supported by verse or biblical reference.  He encouraged people to spend time at these locations in prayer and meditation for the dedication that the rock supports. By January 1912 over 500 rocks had been dedicated.

In 1909 with the help of some friends he began building outdoor chapels (bleachers and pavilions) at McConnell's Grove, Altar Rock, Chapel Rock, Tunnel Hill, and the Millcreek trestle. Newspaper advertisements placed by him schedule outdoor public worship services and he developed a community following. This ends during the next year however when the community became aware of his past family troubles.

In 1911 he moved into a cabin on Altar Rock living almost as a hermit and began penning his Dedicated Rocks Book. In 1912, he began inscribing many of the previously dedicated rocks.  By 1913, at least 165 had been inscribed, with 3 inch, 12 inch, 24 inch or 30 inch letters.

One of the rocks relates to a perceived order from God that he marry a local lady, who apparently was not inclined to be the wife of a man living on a rock. There appears to be evidence on the rock of a conflict with this family.

The last known rock inscribed is in the Scripture Rocks Park and dated in July 30, 1913.

Douglas disappeared from the record for a couple of years, but in September, 1915 he made the newspaper when he was committed to jail.  An appointed local commission declared him insane and transferred him to the Dixmont State Hospital where he spent the rest of his life, dying on August 26, 1942. His grave is in the Temple Cemetery near Hazen, PA.

Not surprisingly, his unusual behavior and the role that Douglas played out within the community generated a mix of both support and disdain for his cause.  As a matter of preference, he took the harder path which he described as: "I choose to be a fool in the eyes of men rather than the eyes of God."  His legacy today continues to invoke intrigue, speculation and discussion.  By learning what Douglas Stahlman wrote on paper and stone, we may better understand both the man and the community he touched. 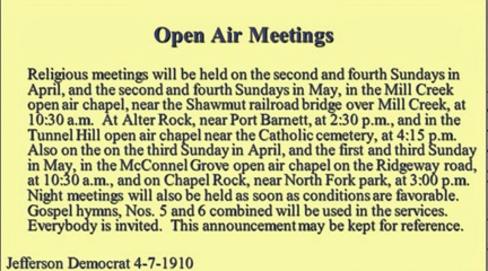 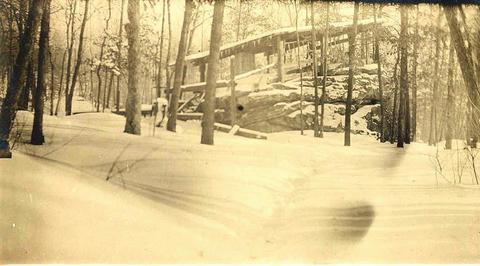 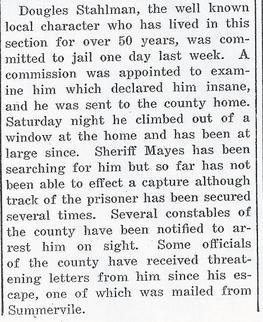 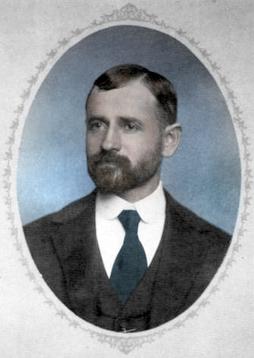